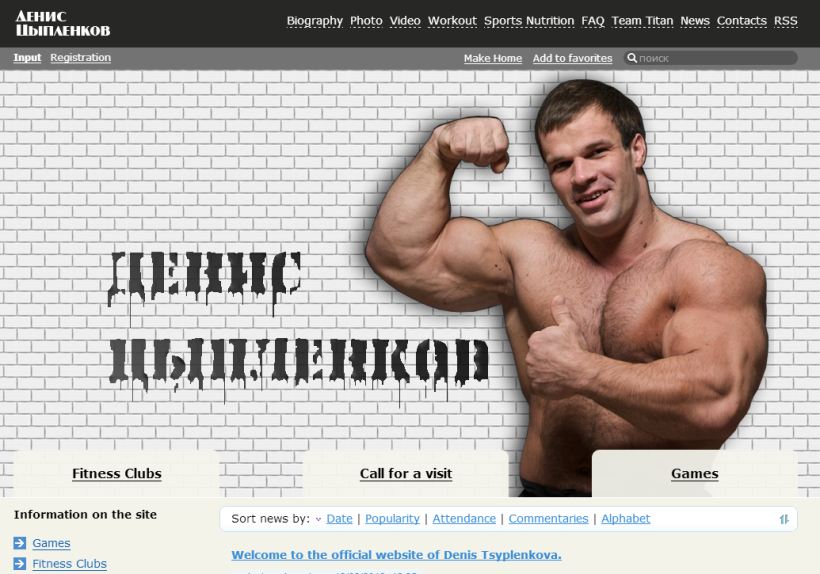 I – Denis Ivanovich Tsyplenkov
Born on March 10, 1982 in the city of Krivoi Rog Ukraine. At the age of 6, I went to secondary school No. 105, immediately started attending various sports sections. In 1993, he began to engage in kettlebell lifting with the famous coach Yakimenko SA. We found a common language and before finishing school I trained with him. Under his guidance, we have achieved good results. At the age of 14 I became KMS on weight, but since the sport itself was not in demand, we were re-qualified for arm wrestling, Moiseyev IB helped us in this. – winner of a number of prestigious tournaments and promoted army sport in our city. Thanks to our joint efforts, I became the champion of Ukraine and Europe among juniors.

After graduation, he moved to Moscow to continue his studies, but it was not so simple for the citizens of the CIS. Soon I got a job in Moscow, otherwise you will not live. Over time, I mastered this huge city, new friends, and with them new opportunities. In 2002, fate brought me to Turchinsky VE. I finished the trainer courses and still work in his club Marcus Aurelius. Turchinsky played an important role in my development, everything related to participation in different tournaments, we carefully examined and weighed “To be or not to be.”

In 2004 he began to engage in power extreme. During his time as an extreme he managed to become a multiple winner and prize-winner of a number of tournaments. I am a member of the Russian extreme power team. He also took part in a number of different commercial tournaments in arm-sport. Since 2005, I am in favor of the city of Syktyvkar.

Armwrestling has always lived in me, but at the amateur level. In 2008, I was offered assistance in further development of my arm sport skills by the honored trainer Kote Razmadze, with his offer I gladly agreed. Under his leadership, I became the owner of the intercontinental belt and won the title of world champion among professionals.

I am engaged in advertising sports nutrition, I spend various sports events.

Currently I work as a deputy in the village of Obukhovo, Noginsk district of the Moscow region. Actively I help the residents in resolving the issues of housing and communal services.

Summary table of power achievements and measurements of Denis Cyplenkov:

*? – All I go, I go on the record beaten Arnold Schwarzenegger in 1972, which states that the weight of the body on the number of times. I recall with a weight of 115 kg old Arnold lifted the barbell biceps standing 120 kg 20 times, the fact remains that Guinness World Records. With my 140 kg will not soon I will go.
RPT – general physical training, the average number of 15-20 times, to give muscle tone.