As expected by all armwrestlers, Yoshinobu Kanai was the clear winner 🙂 : 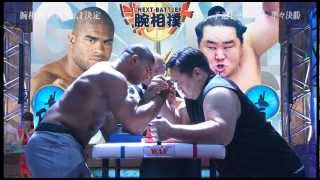 The winner of the tournament then had to face Yoshinobu Kanai, who was the world arm wrestling champion at 176 in 1999, when he was 100 pounds lighter.

Kazushi Sakuraba, 187 pounds, beat Kazuhiro Kiyohara, 45, a 250-pound former Japanese baseball star who was considered the toughest guy in baseball during his career.

334-pound sumo, Sho Ten Ro, one of the rising stars in that sport, beat a 212-pound football star, Kenzo Waku.

Overeem next beat Asashoryu which they pushed as K-1 world champion vs. Sumo grand champion.

Kameda put down Sakuraba, whose arm appeared burned out from his previous fight in what they pushed as boxing vs. pro wrestling.

Sapp next beat Hunt quickly in what they promoted as pro wrestling vs. UFC.

Overeem vs. Kameda. While Overeem won, probably easily, Kameda put up a fight and Overeem when it was over said he was shocked at how a guy that small could be that strong.

Here it is the documentary about Alistair Overeem in which you can see scenes from the backstage of the same armwrestling tournament in Japan:

THE REEM SEASON 3 EPISODE 1: RETURN OF THE REEM