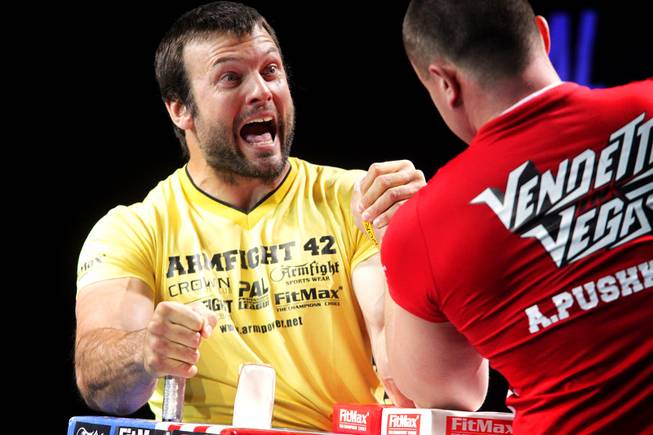 Canadian Devon Larratt, left, taunts his opponent Andrey Pushkar of the Ukraine during a Vendetta in Vegas series arm wrestling match at the Crown Theater at the Rio in Las Vegas on Thursday, June 28, 2012. Larratt took the match.

Arm-wrestling may be a niche sport, but these guys put on a good show

Arm Wrestling at the Rio Maybe this is how the UFC got started.

Minutes before going on live television early Thursday afternoon, organizers of the Professional Armwrestling League are frantically shuffling through their makeshift arena inside the Crown Bar at the Rio, putting on the final touches to one of their major events of the year.

Someone is searching for music (the trendier the better) to play during matches, a referee is being tutored on how to operate the camera that will monitor the action, and television commentators are brushing up on biography information of the nonhousehold name arm-wrestlers. OK, they are all nonhousehold names.

The participants, several of whom are European, are curiously wandering through the near-vacant ballroom with their arms wrapped tightly in a towel to stay warm, similar to how a baseball pitcher cares for his arm in the dugout between innings.

For as much as you’d expect them to have a dislike for each other, they don’t.

They socialize before and after the matches, exchange pointers and seem sincerely happy to share the stage with each other. They know putting on a good show will help continue to pique the interest of first-time television viewers and ultimately help this niche sport reach new heights. The event is televised by Fight Now TV, which is an around-the-clock combat sports network.

It’s widely popular in Europe, but not so much in the States, which is why promoter Jacob Tuygun of KLA Sports is happy to be in Las Vegas.

“This is where cultures come together,” Tuygun said. “This is a good place for the sport to grow.”

About 30 fans are sitting at tables a few feet from the stage — some surely curious for their first glimpse at the sport while others seem schooled on technique and later are yelling words of encouragement to the participants. They arm-wrestle on a table that is about 4 feet high, with levers at the edge used to grip the nonwrestling hand for maneuvering to get momentum during a match.

For all the confusion, it looks like a finished product once the lights are on. Give credit to the arm-wrestlers for saving the day.

Canada’s Devon Larratt does more than his share in entertaining the crowd. In a left-handed match, he takes down Andrey Pushkar from the Ukraine with a 5-1 victory for the league’s super heavyweight title. Larratt was already the right-handed super heavyweight champion, adding to his legacy by taking down the much bigger Pushkar.

They say the size of the arm-wrestler doesn’t matter, but to my amateur eye, Pushkar — at 6-foot-3, 276 pounds — looks unbeatable. The 220-pound Larratt easily controlled the match, seemingly playing with Pushkar and humorously yelling, “So massive, so massive,” when pinning Pushkar’s hand to the surface.

Larratt clinched the left-handed title with a pin in the fifth round, but since rules dictate all six rounds must be played, he flexed his muscles for another pin in the sixth round. That’s what makes Larratt one of the sport’s best performers.

Forget about the multiple championships and claims of one of the event’s all-time greats. First and foremost, he’s a spokesman for the activity. Like a true pro, he finished off his opponents to the roaring appreciation of the crowd.

“It’s a mental thing,” Larratt said. “I don’t want Andrey to ever feel he has a chance to beat me.”

Larratt won’t get rich anytime soon. Despite being one of the unquestioned best and having a hectic travel schedule, he’s only guaranteed “the trip to Vegas, beer money and a few bucks,” he jokes.

Meanwhile, fighters from the Ukraine and other countries in Europe where the sport is most popular are professionals and receive bonuses from their government when they win, Larratt said. Larratt has a full-time job but still finds time to train each night.

In between rounds, the European arm-wrestlers have people massaging their arms and receive instruction on changes they need to make. It’s like Manny Pacquiao retreating to Freddie Roach in the corner.

Larratt and America’s Michael Todd — who also won his match Thursday — simply grab a bottled water and joke with the public address announcer before the bell rings to signal a new round.

While the atmosphere is laid-back, the fighters take each round seriously. They maneuver their arms and feet to get the best advantage, using the technique they’ve mastered in years of training and daily practice. Half of the battle is having both wrestlers lock arms while keeping their elbow touching the table before the round begins.

Larratt, despite rarely lifting weights, has 19.7-inch biceps and a 19.3-inch forearm on his left arm, and more strength than you can measure. I don’t lift weights either, which helps explain why Larratt’s biceps and forearms are twice my size, right?

Pushkar would grunt and try everything in his power in an attempt to pin Larratt. He just couldn’t get him to budge.

“It’s all technique. I’ve been doing this for years and know how to take advantage of mistakes,” he said.

Arm-wrestling, no matter how intriguing it is to watch two powerful athletes try to dominate the other, is light-years away from enjoying a popularity push organizers envision. But with performers like Larratt leading the way, it sure makes for a good afternoon of entertainment.

4 thoughts on “Arm-wrestling may be a niche sport, but these guys put on a good show”