This list was made by XSportNews using the announcement made by Robert Drenk in the live stream from UAL Headquarters Grand Opening – 31 August 2013, and the announcements made by the Ultimate Armwrestling League on facebook. To see all pullers visit ► TheUAL.com/pullers ◄ 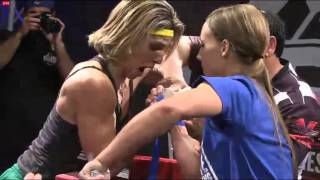 (◄ Click the image if you want to see the video.)

12. Marcio Barboza – Announced on 07 September 2013 by The UAL: ” Newest Signed Athlete Marcio Barboza! Congrats and welcome to the UAL! ”

15. Bryan Ruskin – Announced on 18 September 2013 by The UAL: ” The UAL Welcomes Middle Weight Bryan “All Business” Ruskin to the Family! ”

” As most of you are aware we have signed a few Athletes to exclusive contracts. Yes this means these athletes are Exclusive to UAL events only! Let me start out by saying we are looking for more Athletes! We have a TV series coming out and will need to fulfill over 300 Ultimate Match Ups in a short period of time. This means we will need to sign a lot of athletes very fast because we will not give anyone a shot at the TV series without a contract. Let me get into what the benefit is for “Contracted” Athletes:

– Possible TV Series Contract
– Promoting & Building of your “Likeness / Character” on our dime
– Professional Pictures and profile featured on the UAL Website
– Puller Cards
– UAL Uniform (if selected for on camera appearance)
– Big Money Ultimate Match Up’s ($1000 – $10,000 a Match)
– Discounts on all UAL Merchandise 50%
– UAL Dinner Parties (Like the one we had last night) ask a Contracted Athlete how it was….
– Title Belts and World Championship Rings
– UAL Gym access at the Corp Office
– Appearance reimbursements and more

These are a few of the things contracted Athletes get along with once you have earned your keep you may get a guaranteed MONEY Contract! That means an amount of Money no matter what! We hope that everyone wants the sport to grow and we believe this is how we will make that happen. We are putting our money and time on the line to build this for everyone. Some people will not be believers and so be it but for those of you that want to be, join us and enjoy the fruits of your labor as we take this to new levels.

We will still have tournaments in which everyone “Contracted” or not can enjoy, but only the “Contracted” Athletes will enjoy the above mentioned perks. We will be revamping our website over the next couple weeks so stay tuned for some nice changes. We are going to start making our own productions in house and streaming “LIVE” at certain events and functions with a 3 camera HD setup! For those of you that are watching the streaming so far I’m sure you have noticed its been getting better, we plan on making it smooth and very entertaining to watch. The UAL “Arm Candy” girls Megan and Ana will be doing interviews in between matches so theres no down time and always something to keep you glued to the screen!

Now heres where we see the benefit for the Sport to grow, as we build an audience with the TV series we will be focused on the Ultimate Match Up’s and larger scale professional Tournaments. We will push the new comers to the sport to the current leagues that have supported Armwrestling by posting their events on our site as to how you get involved! We will farm from these Promoters events as a co-op and the sport will grow! The current promoters will make way more money off entries and continue to support the Sport by having these events, we will advertise which events we support and plan on “Farming” from for talent. We are simply looking to take the lead Role here not kill any other promoters….

We look forward to a bright future for us all.

” We’ve been at this for 4 years, it’s not like we’re coming in and trying to “Buy” the sport! I’m NOT some rich guy trying to BUY you, I’m a guy that’s worked my A$$ off saved my money and investing it into this Sport which will give opportunities to athletes that wish to take it. It’s a very risky gamble on my part! There’s no risk for the Pullers, if it goes like planned its a HUGE benefit for everyone if it doesn’t then I wasted my life savings, time away from my family and the same for my Partner Bill Collins the athletes took some time to be exclusive so be it. That’s how it works, I’m willing to invest my hard earned money and time into these athletes in return I ask for exclusivity and loyalty no different then any other sport. Look at every other Sport, NFL, UFC, NASCAR, Soccer, MLB they all sign contracts… Yes they get PAID BIG amounts of money but I guarantee they started just like we are! So basically you don’t have anything to worry about because no one from UAL or any of those other Sports plans on paying off your house or signing you to any contract. Keep pulling my friend and thanks for the support. ”

See all the articles about #UAL – Ultimate Armwrestling League